A lavish diamond necklace worn by Catherine the Great 250 years ago is one of the highlights of Sotheby's Magnificent Jewels & Noble Jewels auction in Geneva on November 16.

The jewelry offers a rare glimpse at the grandeur and elegance surrounding the Russian Royal Family and, specifically, Catherine II, Empress of Russia. One of the great leaders in Russian history, Catherine the Great (1729 – 1796) commissioned the diamond necklace and bowknot clasp as two separate pieces between 1760 and 1780.

Catherine the Great was a connoisseur of fine jewelry. Her magnificent collections were crafted by the most highly skilled French jewelers. Sotheby's noted that stylistically, the necklace with bow clasp is consistent with traditional designs of the late 18th century, which would have been fastened around the neck using a ribbon or stitched directly onto clothing.

The necklace boasts 27 graduated cushion-cut diamonds in open settings on an articulated band. The ribbon bow clasp also features cushion-shaped diamonds in an openwork floral pattern. The jewel carries a pre-sale estimate of $3 million to $5 million.

According to Sotheby's, the survival of an 18th century jewel of this stature is almost unheard of outside royal or museum collections. Oftentimes, these pieces from the 1700s would have been broken up or reworked to align with later fashions.

At the outbreak of the First World War in 1914, the Russian Imperial treasure was moved from St. Petersburg to Moscow, and the jewels were stored in sealed cases in the Kremlin. Thirteen years later, a number of items — including the diamond bow necklace — were taken to London and offered at auction at a sale of “The Russian State Jewels.” For the next 89 years, the diamond necklace with the bow-shaped clasp would be possessed by only two private collectors.

Interestingly, the current owner obtained the necklace at a Sotheby's auction in 2005. At that time, it sold for $1.5 million, which was on the high end of the pre-sale estimate.

Also expected to fetch $3 million to $5 million at Sotheby's Geneva sale is a suite of colored diamond jewels that date to the early 1700s and are suspected to have ties to Russian royalty. 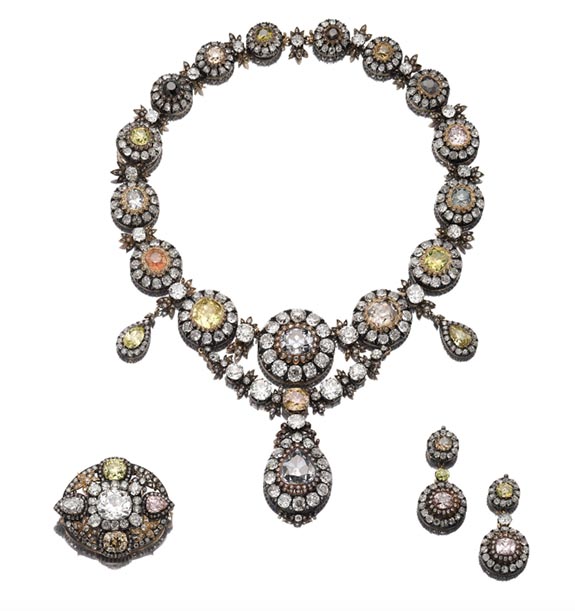 The jewelry suite — which includes a necklace, brooch and earrings — contains colored diamonds that may have been part of a gift Empress Catherine I of Russia (1684-1727), wife of Peter the Great, gave to Sultan Ahmed III to negotiate the end of the Siege of Pruth in 1711. Apparently, the Sultan accepted the sumptuous gift, leading to a peace treaty between Russia and the Ottoman Empire.

The gemstones were then used by the Sultan Abdul Hamid II (1842 – 1918) for the present necklace, which he offered to the wife of Teufik of Egypt, possibly for the birth of the last Khedive of Egypt and Sudan in 1874, according to Sotheby's.

“These two stunning jewels carry with them a fascinating insight into the luxury and opulence of the Russian court," said David Bennett, Worldwide Chairman of Sotheby’s International Jewelry Division. "It is difficult to overstate their rarity and historical importance, and I am thrilled to be able to present them side by side this autumn."