24.18-Carat 'Cullinan Dream' Is the Latest Record Breaker Sourced at the Legendary South African Mine

Over the past 113 years, a single mine in South Africa has been the most prolific source of the world's largest and finest-quality diamonds. On June 9, the 24.18-carat "Cullinan Dream" — named after the mine that famously yielded the 3,106.75-carat Cullinan — broke the record for the highest price ever achieved for a fancy intense blue diamond. It was the largest diamond of that color classification to be offered at auction. 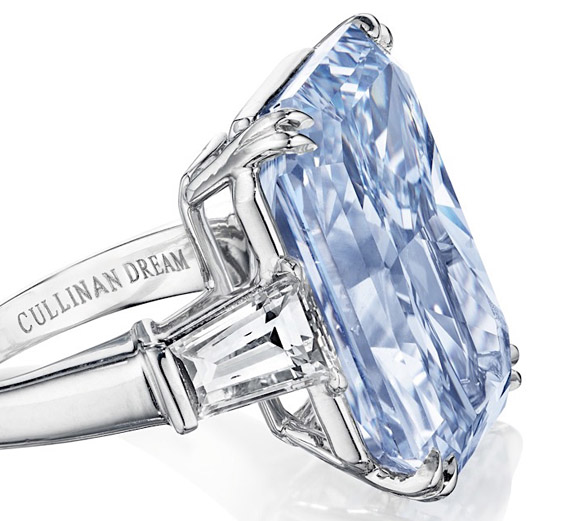 Bidders at Christie’s Magnificent Jewels auction in New York watched the hammer go down at $25.4 million, which was in the mid range of the auction house's pre-sale estimate of $23 million to $29 million.

Discovered at Petra Diamond's Cullinan mine in 2014, the rough diamond that produced the Cullinan Dream weighed 122.52 carats.

From that rough stone, a master gem cutter eventually delivered four notably sized blue diamonds: a cushion-cut gem of 7.00 carats, a radiant-cut gem of 10.30 carats, a pear-shaped gem of 11.30 carats, and finally, the Cullinan Dream, a cut-cornered rectangular mixed-cut gem of 24.18 carats.

Set in a ring, the Cullinan Dream is flanked by tapered baguettes in a platinum mounting inscribed “Cullinan Dream.” The baguettes have a total weight of 2.36 carats.

Petra Diamonds had sold the 122.52-carat rough blue diamond into a cutting and polishing partnership in 2014 for $23.5 million and maintained a 15% stake in the proceeds from the Cullinan Dream after it was sold at auction, minus expenses.

While setting an auction record in the "fancy intense blue" category, the Cullinan Dream's selling price was less than half the amount earned by the much smaller "Oppenheimer Blue," which yielded $57.5 million at Christie’s Geneva in mid-May. The 14.62-carat Oppenheimer Blue was able to set a new world record for any jewel sold at auction because it carried the top color grade of "fancy vivid blue," the top purity rating of Type IIa, and the near-perfect clarity rating of VVS1. The Cullinan Dream, by comparison, had a clarity of VS2 and a purity rating of Type IIb.